The EpiQair engine converts pressure released from liquid air to shaft power. All you need for the engine to function is ambient air to warm the liquid air.

Liquid air boils at around -200 C at ambient pressure.   If it is confined in a closed volume and thus, not allowed to expand, while being heated to ambient temperature, then the 200 C temperature rise will cause its pressure to increase to about 350 Bar.

The heat for warming the liquid air is readily derived from ambient air passing through a radiator and heat exchanger system, as shown in the schematic. This super-critical air at 350 Bar pressure and around ambient temperature is injected into the transient chamber of the EpiQair expander at the start of the expansion cycle. 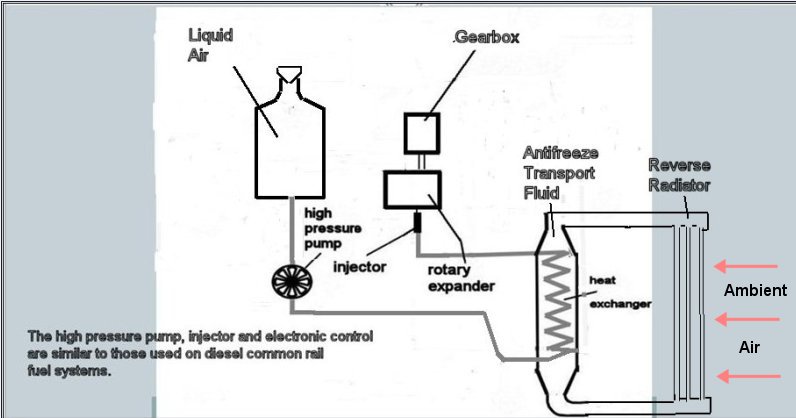 The isothermal expansion cycle is completed within about 90 degrees rotation of the lobed rotor as shown in the cycle sequence and is repeated for each lobe/pocket interaction.

The output shaft is on the axis of the lobed rotor and its operating speed is in the range 10 - 20,000 RPM.  It can deliver 130 Wh per Kg. of liquid air - making it fully competitive with the best currently available battery technology.

This enables the EpiQair engine to achieve a high power density - it is only about one tenth the size and weight of a piston engine of equivalent power - something of a mighty midget!

The two key features of the EpiQair engine which make it ideally suited to operate on liquid air energy source for deep level mining as well as automotive applications are:

a)  its large and variable expansion ratio and

b)  its freedom from mechanical friction.